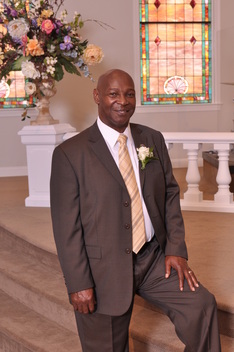 Clarence Singleton is a motivational speaker, author, a former United States Marine, a veteran of the Vietnam War, and a Purple Heart Medal recipient. Singleton is also a decorated former New York City Firefighter whose unit responded to the first attack on the World Trade Center in 1993, where he
was credited with saving numerous lives.  After retiring from the FDNY in 2000, Singleton volunteered for duty on September 11, 2001 at the World Trade Center, where he was seriously injured and was featured in One Nation: America Remembers September 11, 2001 by the authors of Life Magazine.

One of eight children, Clarence Singleton was born in Sumter, South Carolina in 1949. After his father deserted the family when Singleton was six years old, he held numerous jobs (frequently being taken out of school) to help support his family while managing to keep his grades well above average. Before graduating from Lincoln High School in 1967, Singleton enlisted in the United States Marine Corps and was sent for recruit training at Marine Corps Recruit Depot Parris Island, South Carolina. During training, he was selected as the Outstanding Member of his platoon—an honor bestowed upon the recruit who most nearly
attains the characteristics of an ideal United States Marine—and he was meritoriously promoted.

Singleton served in Vietnam as a Lance Corporal with the 2nd Battalion, 9th Marines. With only 28 days left in his tour of duty, Singleton received multiple wounds while trying to save lives during a 122 rocket attack on his unit, which earned him the Purple Heart Medal. After more than a year of hospital care in Japan and the Charleston Naval Hospital, Singleton decided to redirect his life and moved to New York City where one of his older sisters lived.

In 1969 Singleton was employed by Manufacturers Hanover Trust Company where during his nine year tenure, worked his way up to supervisor of the Quality Control Section. Deciding to pursue a degree, Singleton enrolled in New York City Community College in 1975 while holding down his full time position. In
1978, he decided to join the New York City Fire Department.

During his 22 year tenure with the New York City Fire Department (FDNY), he received a number of awards for bravery and outstanding initiative. In 1993, he and his fire unit responded to the first attack on the World Trade Center where he was credited with saving numerous lives including that of a pregnant
worker who went into labor during the attack. In 1994, Singleton was promoted to Fire Lieutenant and sent to supervise a firehouse in Bushwick, a sprawling neighborhood in the New York City borough of Brooklyn. In August, 2000, he retired from the FDNY.

When the World Trade Center was again attacked on September 11, 2001, donning his firefighter uniform Singleton voluntarily went to “Ground Zero” to help. Working at the base of the collapsed South Tower, along with another firefighter and a police officer, he extinguished numerous vehicle fires. While there,
the second tower collapsed, seriously injuring Singleton. After being treated at a nearby hospital, Singleton made his way back to Ground Zero, seeing what he could do to help. Suffering from extensive injuries and post-traumatic stress disorder, Singleton decided to leave New York City and ultimately ended up in
Midlothian, Virginia.

Singleton has delivered numerous inspirational speeches throughout the Mid-Atlantic. He has been featured in a number of regional publications and he has appeared on the Montel Williams Show, as well as several radio stations. For the past three years, including 2012, Singleton has delivered the keynote address at the Chester County’s Honor and Remembrance Ceremony, commemorating the anniversary of 9/11—the day that changed the world.